What Not To Do When Collecting Workers’ Comp Benefits 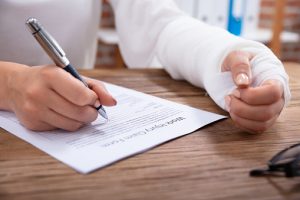 If you've been injured on the job and are collecting workers’ compensation, you could be your own worst enemy. After some time has passed, you may think you're well enough to take on some work “on the side” to earn a little extra cash at the same time you are receiving benefits. You may do so out of a sense of guilt that you are not providing enough support for your family. There's no harm in that, right?

You couldn't be more wrong.

Doing so is considered workers' compensation fraud and can result in fines, paying restitution and even facing criminal charges.

“Most of them do have injuries, there's some form of injury that happens to that person. The question becomes, how long are they out with that injury?”

The Road to fraud is paved with good intentions

You may think your intentions are good, but fraud investigators are going to view you the same as other workers who cheat the system. Here are three examples:

The workers' compensation bureaucracy can seem intentionally designed to frustrate you and prevent you from legally collecting benefits. Maybe your claim was denied. Maybe an adjuster doesn't believe you were injured on the job. Maybe you're confused by the red tape and legalese. You are under tremendous physical, mental, emotional and financial stress – perhaps unable to provide for your family as your case drags on. You need expert help.

For over 30 years the workers' compensation attorneys at The Law Offices of James F. Aspell, P.C. been handling cases just like yours  all across Connecticut.  We will combine our thorough knowledge of the workers' compensation system with our extensive experience to answer all of your questions and secure financial compensation for you and your family (you also may be entitled to lost wages and Social Security Disability benefits). Call us today for a free case consultation. You pay nothing unless we win your case.