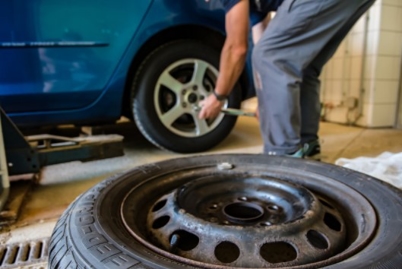 Motorists should keep an eye on the condition of their tires before hitting Connecticut's  hot roads this summer. Weak tires are often to blame for even one car accidents that are often tragic. tragic. It is very important to check and maintain the condition of your tires. Keep the air pressure as consistent as possible and have your tires rotated regularly so the tread wears evenly.

Tire walls can become weak after vehicles drive sit in warmer temperatures. Hot Connecticut weather means your tires deflate slightly, resulting in motorists simply inflating their tires with more air pressure. But once you hit hot roads and the temperature inside the tire goes up, that air in your tires expands, thus causing tire blowouts. Also, driving up and down Connecticut's hilly terrain, the altitude can have the same effect.

WHAT TO DO IF YOU BLOW A TIRE

If you lose the tread off one of your tires, authorities recommend that you slowly remove your foot from the accelerator and then begin to gently apply pressure on the brake. When tread separates from your tire, drivers often lose control and vehicles have been known to roll over several times. Usually, skid marks indicate the driver panicked and started to brake suddenly before allowing their vehicle to stabilize.

However, even if you maintain the condition of your tires, things could still go wrong.

A recent lawsuit against Firestone was settled for an undisclosed settlement was awarded to a family whose parents died in a car crash. Apparently, a truck's tire blew out causing the truck to cross the median and smash into their vehicle. The plaintiffs alleged that since Bridgestone bought out Firestone, the company started cutting material costs, increased production and reduced the number of trials conducted before bringing tires to market.

By knowing the signs of faulty or damaged tires, you can help prevent an accident from happening. Here are some of the warning signs to be on the lookout for:

WHAT IS THE MINIMUM TIRE TREAD DEPTH THAT IS SAFE?

In general, all vehicles should have a minimum safe tread depth of 2/32". In fact, this is actually a law in most states. The best way to check your tire's tread depth is by placing a penny into the tire groove with Lincoln's head facing down towards the tire. If the tread does not reach to the top of Lincoln's head, that means your treads are too worn and you should replace your tires.

HOW OFTEN SHOULD YOU REPLACE YOUR TIRES?