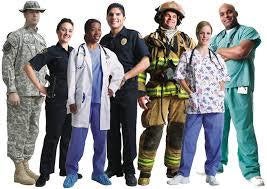 With some jobs, it's deceptively easy to think there is little risk of injury or illness. You go to work, do the job and leave.

As a Connecticut  first responder, you know that isn't true for you. The usual hazards are there, every day. And you can't predict all the potential dangers you will encounter – including lingering emotional effects from responding to horrific situations.

Given this reality, here are three things for police, firefighters, paramedics and other first responders to know about what workers' compensation covers.

When you think of workers' compensation, you likely think of people slipping or falling and getting injured. You may even think of the people who get repetitive stress injuries from lifting or typing.

Those are some of the more common workers' compensation claims, but they are not the only ones. Workers' compensation also applies to occupational illnesses, including COVID-19 Corona virus. . If you end up seriously sick because of something that happened at work.

But what if the illness you develop as a result of your job is post-traumatic stress disorder (PTSD)?

Many first responders develop PTSD after experiencing extremely difficult events on the job. Among firefighters in Connecticut, for example, 4 out of 5 have unresolved issues of emotional health resulting from such events.

Across the U.S., states have different approaches on whether first responders who suffer psychological trauma without a physical injury are eligible for work comp. Generally, in Connecticut, a mental or emotional impairment is not covered unless results from a physical injury or an occupational illness.

Connecticut has been considering changing its work comp coverage for PTSD.

The exception described above is a limited one, however, in that applies only to PTSD after seeing someone else die on the job.

In the last two legislative sessions, Connecticut has been considering expanding its work comp coverage for PTSD and other mental health conditions caused by extreme work situations. To date, this change has not been implemented and given that the 2020 legislative session has been whistled to a stop before it even began, there will be no change in the immediate future.

The change the legislature is looking at would make work comp coverage more available to you as a police officer or other first responder. Under certain circumstances, you would be eligible for PTSD even if you did not directly take part in a horrific situation in which you saw others' die.

If you are uncertain about what your rights to work comp are under the current law, contact a knowledgeable  Hartford workers comp attorney attorney at our firm.