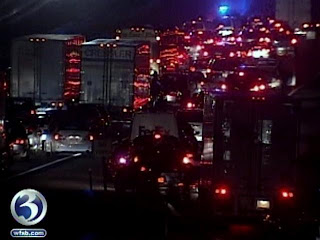 WFSB, the CBS affiliate in Hartford is reporting that "a section of Interstate 84 was closed in Tolland Friday night after a crash that began on the eastbound side of the roadway ended on the westbound side. Both sides of the highway were closed just after 7 p.m. in the area of exits 67 and 68. Police said two cars were involved in the crash and at least three people were airlifted to Hartford Hospital with serious injuries. "We've been sitting here for two hours, got out near the gas station for an hour, got back on," said driver Lynn Hilton, of Massachusetts, who got stuck in traffic created by the crash. Both sides of the roadway remained closed at 11 p.m." At The law Offices of james F. Aspell, P.C. in West Hartford, we provide skilled and compassionate representation for those injured in auto accidents as well as those injured on the job in Connecticut . Call today for a free consultation.