Summer Job Season is Upon Us: A Time for Teens To Be Careful 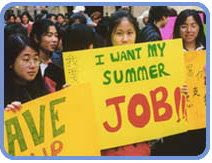 In a few weeks, millions of teens will be joining the work force, many for the first time. For most, nothing out of the ordinary will occur, but for about 70, their jobs will be lethal. About every three minutes, a teen is injured on the job. Worksafe BC has compiled the true stories of four ordinary kids whose first jobs proved devastating. In this series of short, compelling video clips, each teen tells the story of their injury, how it happened, and how it has affected their lives. The teens' parents also talk about things from their perspective. The clips are graphic, frightening, and real, and demonstrate just how quickly something can go wrong. They should be mandatory viewing for employers who hire teens, for teen workers, and for parents of working teens. John's story - how 16-year old John Higgins broke his back in a forklift accident. Jennifer's story - how 19-year old Jennifer Fourchalk lost three fingers, which were caught in dough-making equipment in a pizzeria. Michael's story - how 18-year old Michael Lovett lost a leg when sucked into machinery in a sawmill. Nick's story - (raw language alert) - how 19-year old Nick Perry became paralyzed when crushed by lumber in a lumberyard. Some of the common themes in the stories: * Enthusiasm. These kids badly wanted to please and impress bosses and co-workers and to do a good job. The teens didn't want to ask for help or to appear unwilling to do what was asked of them - they wanted to be mature and good work contributors. * Inexperience. The teens seemed unaware of the power of equipment they were using and the potential for injuries. Jennifer didn't realize how powerful the kitchen equipment was. Michael seemed unaware that he could refuse to engage in unsafe behaviors, like jumping off dangerous equipment. They appear to assume that dangers were just an inevitable condition of the work. * Lack of training. None of these teens had been properly trained in the equipment they were using nor had they received basic safety practices and procedures, such as lock out/tag out. All of these injuries might have been prevented had the workers been trained and had machine safeguards been in place. John actually emulated unsafe practices he had observed other workers doing. * Working alone. In most of these examples, the teens were not being supervised when the injuries occurred. * Regretful parents. Parents assumed employers would look out for their kids. Several parents expressed initial misgivings about the jobs their kids had taken. Many expressed regret that they hadn't looked into the work conditions more.