You're Not Just imagining It: Connecticut in "Top Ten" of State Foreclosure rates 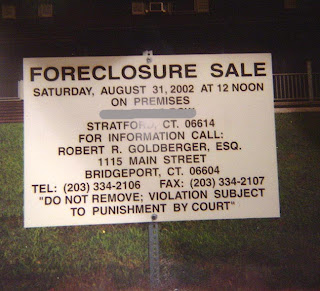 LOS ANGELES (AP) - The number of U.S. homes heading toward foreclosure more than doubled in the first quarter from a year earlier, as weakening property values and tighter lending left many homeowners powerless to prevent homes from being auctioned to the highest bidder, a research firm said Monday. Among the hardest hit states were Nevada, Florida and, in particular, California, where Stockton led the nation with a foreclosure rate that was 6.6 times the national average, Irvine, Calif.-based RealtyTrac Inc. said. Nationwide, 649,917 homes received at least one foreclosure-related filing in the first three months of the year, up 112 percent from 306,722 during the same period last year, RealtyTrac said. The latest tally also represents an increase of 23 percent from the fourth quarter of last year. RealtyTrac monitors default notices, auction sale notices and bank repossessions. All told, one in every 194 households received a foreclosure filing during the quarter. Foreclosure filings increased in all but four states. The most recent quarter marked the seventh consecutive quarter of rising foreclosure activity, RealtyTrac noted. "What would normally alleviate the foreclosure situation in a normal market is people starting to buy properties again," said Rick Sharga, RealtyTrac's vice president of marketing. However, the unavailability of loans for people without perfect credit and a significant down payment is slowing the process, he said. "It's a cycle that's going to be difficult to break, and we're certainly not at the breaking point just yet," Sharga added. The surge in foreclosure filings also suggests that much-touted campaigns by lawmakers and the mortgage lending industry aimed at helping at-risk homeowners aren't paying off. Hope Now, a Bush administration-organized mortgage industry group, said nearly 503,000 homeowners had received mortgage aid in the first quarter. Most of the aid was temporary, however. Pennsylvania was a notable standout in the latest foreclosure data. The number of homes in the state to receive a foreclosure-related filing plunged 24.4 percent from a year earlier. Sharga credited the decline to the state's foreclosure relief measures, noting that cities such as Philadelphia put in place a moratorium on all foreclosure auctions for April and implemented other measures aimed at helping slow foreclosures. Nearly 157,000 properties were repossessed by lenders nationwide during the quarter, according to RealtyTrac. The flood of foreclosed properties on the market has contributed to falling or stagnating home values, yet lenders have yet to implement heavy discounts on repossessed homes, Sharga said. Nevada posted the worst foreclosure rate in the nation, with one in every 54 households receiving a foreclosure-related notice, nearly four times the national rate. The number of properties with a filing increased 137 percent over the same quarter last year but only rose 3 percent from the fourth quarter. California had the most properties facing foreclosure at 169,831, an increase of 213 percent from a year earlier. It also posted the second-highest foreclosure rate in the country, with one in every 78 households receiving a foreclosure-related notice. California metro areas accounted for six of the 10 U.S. metropolitan areas with the highest foreclosure rates in the first quarter, RealtyTrac said. Many of the areas - including Stockton, Riverside-San Bernardino, Fresno, Sacramento and Bakersfield - are located in inland areas of the state where many first-time buyers overextend themselves financially to buy properties that have plunged in value since the market peak. "California still hasn't hit bottom," Sharga said. "We have a lot of California homes that are in early stages of default that may not be salvageable because either there's no market or financing available, or both." Arizona had the third-highest foreclosure rate, with one in every 95 households reporting a foreclosure filing in the quarter. A total of 27,404 homes reported at least one filing, up nearly 245 percent from a year ago and up 45 percent from the last quarter of 2007. Florida had 87,893 homes reporting at least one foreclosure filing, a 178 percent jump from the first quarter of last year and a 17 percent hike from the fourth quarter last year. That translates into a foreclosure rate of one in every 97 households. The other states among the top 10 with the highest foreclosure rates were Colorado, Georgia, Michigan, Ohio, Massachusetts and Connecticut