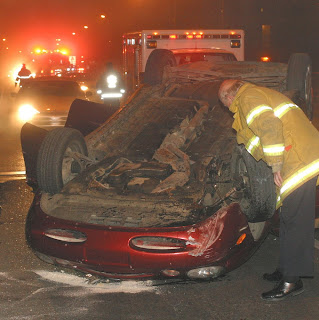 DOVER — - Three teenagers were injured shortly before 5 a.m. Sunday, when their SUV slammed into a rock and then crashed against a utility pole, police reported. The driver, Dustin Balula, 18, sustained a broken leg; passenger Natalie St. Germain, 18, sustained cuts to her forehead; and passenger Michael Ciurylo, 17, sustained serious leg injuries, including a broken femur, state troopers reported. Life Star flew Ciurylo to Hartford Hospital; ambulances took Balula and St. Germain there. Early Sunday, hospital staff reported that Ciurylo, of Columbia, was undergoing surgery. St. Germain, of Windham, was in stable condition late Sunday, and Balula, of Columbia, had been treated and released, the hospital said.

The crash was reported at 4:48 a.m. on Route 6 near Burnap Brook Road. Balula was driving east when he veered off the right side of the road and crashed, Trooper Paul Arigno wrote in an accident report. Troopers from the Colchester barracks were investigating, and had not publicly commented on any possible cause for the crash.